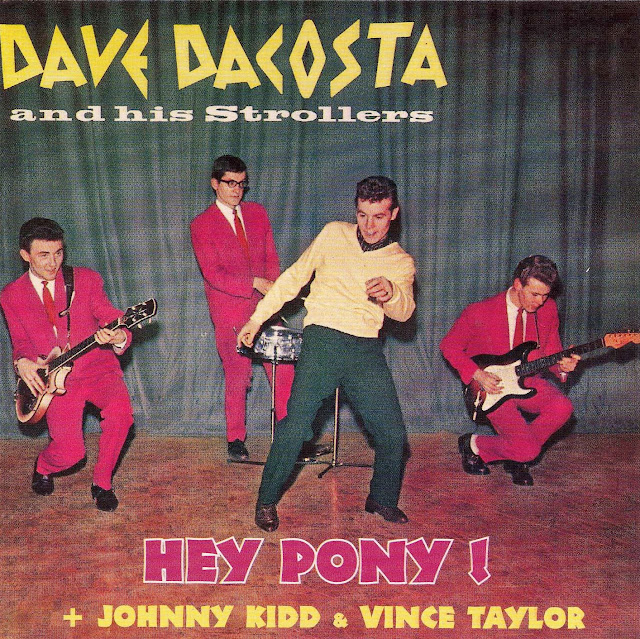 England probably being too crowded with rock groups, some seeked fame and fortune abroad. Some went to Hamburg (you know who they are...) and some chose other continental countries, like Colin Hicks, Tommy Steele’s brother, a star in Italy. Vince Taylor & The Playboys, Johnny Taylor & The Strangers opted for France. So did Dave Dacosta & His Strollers, a very competent combo which arrived in Paris in 1961 when rock’n’roll was at its most popular. They played all the clubs and gathered a faithfull following. This was noticed by a shrewd A&R and in no time Dave and his men found themselves in a studio recording various rock standards like “Be-Bop-a-Lula”, “Tutti Frutti”, the eponymous “Pony Time”, etc. Good musicians in their own right, the Strollers, with Dave on rythm guitar, recorded a few instrumentals, a very popular exercice in France where the Shadows have always been revered. Two EP’s and one 10’ later, Dave and his crew could not resist the offer to go and play in Germany. Their french recordings, of course now among the rarest discs on the collector market, have wisely been gathered on this marvelous CD. As bonuses, nice alternate versions of “baby, That’s All You Gotta Do”, “Dream Lover” by Johnny Kidd ; and “Brand New Cadillac”, “Be-Bop-a-Lula” by Vince Taylor. A real treat for the true english rock’n’roll buff !